We all are familiar with Microsoft’s Windows. This Computer Operating System is currently running on more than 83% of the desktops worldwide.

It’s quite evident from this percentage that Windows has a huge fan-base. Even I’ve been a fan of Windows ever since Windows98 days.

Microsoft tried its luck with bringing the ‘Windows’ experience to smartphones and after a long journey of disappointment, they stopped caring about Windows on smartphones. This was confirmed by Joe Belfiore, Corporate Vice President in the Operating Systems Group at Microsoft., on his Twitter account.

So, If you are a big fan of windows and thinking about buying a Windows Phone, I’d say, “Don’t go for it.” At least, not now.

But still, if you want to experience Windows on a smartphone, you can get that from your Android.

Not theoretically. I am not saying that Microsoft has just announced Windows 10 for Android. No! They haven’t and probably aren’t planning to do something like that anytime soon.

What I am saying is that there are ways, rather, there are apps which can give you the experience of Windows on Android.

You read that right!

There are a few apps available on the Google Play Store which are capable of providing such an experience as if you are using Windows 10 for Android.

Apps to make it look like you are using

Before I begin with the list, let me just tell you that these apps are just like launchers, just to make your Android phone look like it is running on Windows Operating System.

I have a list of five of the best apps which can mimic windows (Both Desktop and Phone) experience on your Android.

Without any further ado, let’s begin.

Out of all of the apps, Metro UI Launcher 10 gets the closest in giving pure Windows 10 (Desktop) experience.

You get the same start screen on your Android that you see on your Windows 10. And along with that, you also get an app drawer styled like the one found in Windows.

Whenever you launch an app, you’ll see a flash screen, just like what we see on our windows. This makes it look more authentic.

Other Windows Start Screen tidbits like drag-and-drop to rearrange tiles and resizing of tiles are also some of the offerings of Metro UI Launcher 10.

If you want the desktop version of Windows 10 for Android, this is the app to go for.

As Metro UI Launcher 10 is just a launcher, the other system functionalities of the phone will remain as it was. The launcher only lets you customize the home screen of your Android.

The launcher is free to download but if you want to get rid of ads, you can get the premium version. 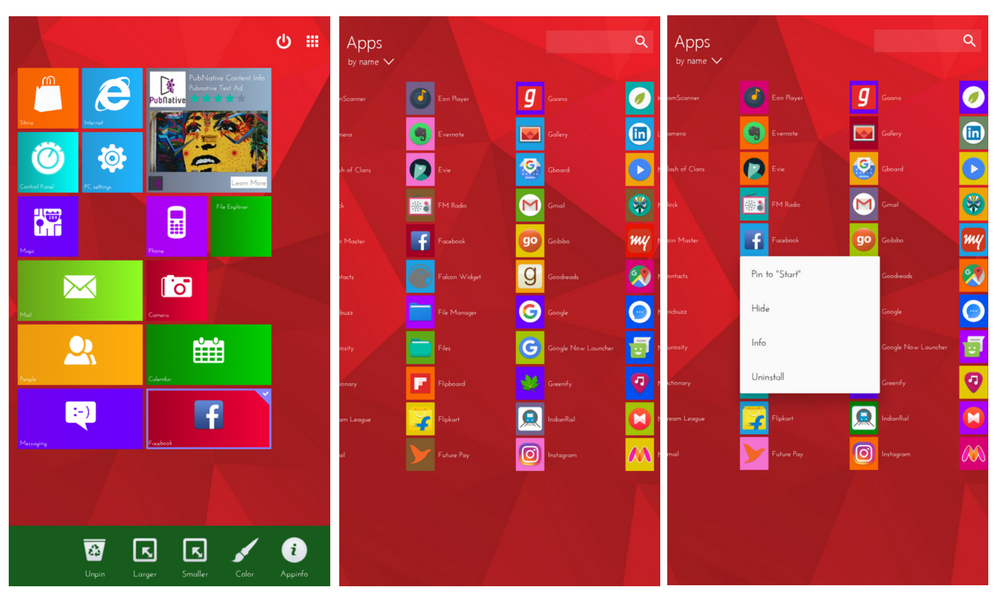 If you want to experience Windows 10 (Mobile Version) on your Android, look no further than Launcher 10.

Launcher 10 is a simple and light-weight launcher for your Android to give a feel of Windows Phone operating system.

It is worth noting that Live-Tiles aren’t as dynamic as found on Windows Phone but it performs the basic tasks like displaying notification content, images from Gallery, etc. pretty well.

Apart from the Start Screen, the app list (App Drawer) is also much like Windows Phone OS.

Other features of this Launcher are the ability to drag-and-drop to rearrange tiles, resize tiles, landscape code, ability to adjust tiles transparency and much more.

This launcher can give you true Windows Phone OS feel on your Android. 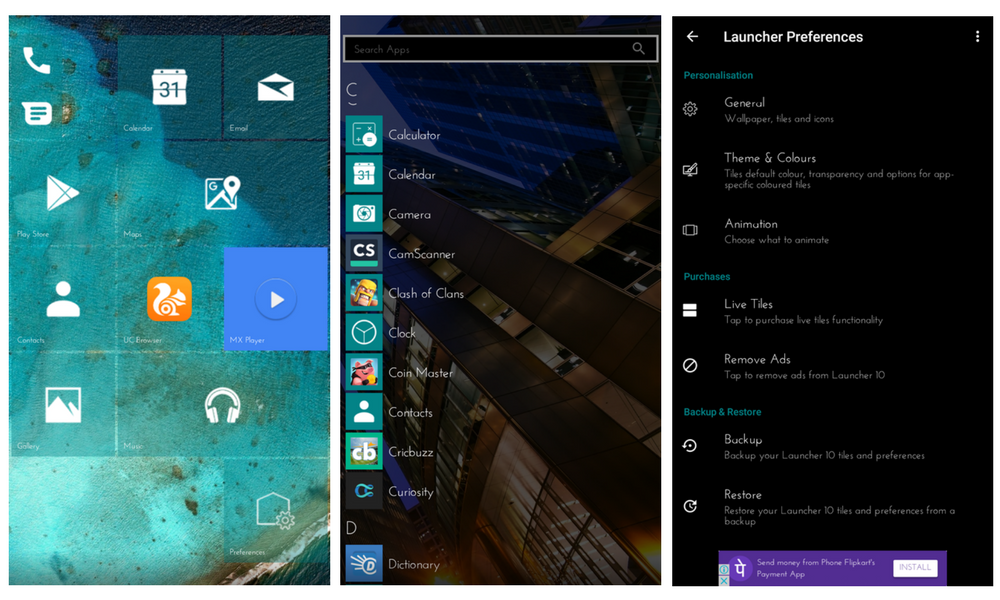 8.1 Metro Look launcher is yet another great launcher which can replicate Windows Phone 8.1 on your Android.

The user interface of this launcher is so authentic that on the first sight anyone can get confused that how are you using Windows on Android?

It offers exact match start screen with tiles, but they are not live tiles. Swiping left will display a list of all the installed apps, just like that on Windows Phone.

You can resize the tiles, drag-and-drop tiles according to your needs and search for an app from the ‘search box’ above the app list.

The launcher has around 20 themes to choose from or alternatively, you can set any image as your start screen’s background.

It also has the option to adjust the transparency of the tiles, change icon color and hide apps. 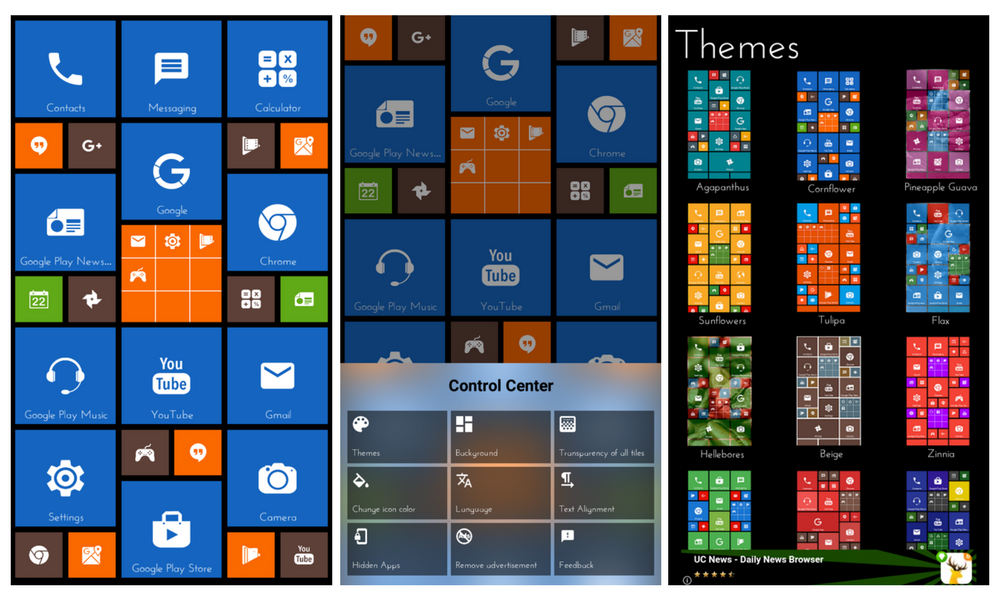 Win 10 Launcher is great for those of you want to experience Windows 8 on Android phones.

It is a fast and light-weight launcher which looks a lot like Windows’s design language, Metro.

At the bottom, you can find five buttons. Start button which is more or less an app drawer, contacts, Task View Icon, Phone and Search.

You can’t customize the background much but the launcher lets you choose from a variety of solid colors and two default backgrounds.

There’s nothing much to talk about features of this launcher as it doesn’t let you pin an app to the Start screen or resize tiles or change the positioning of the tiles. 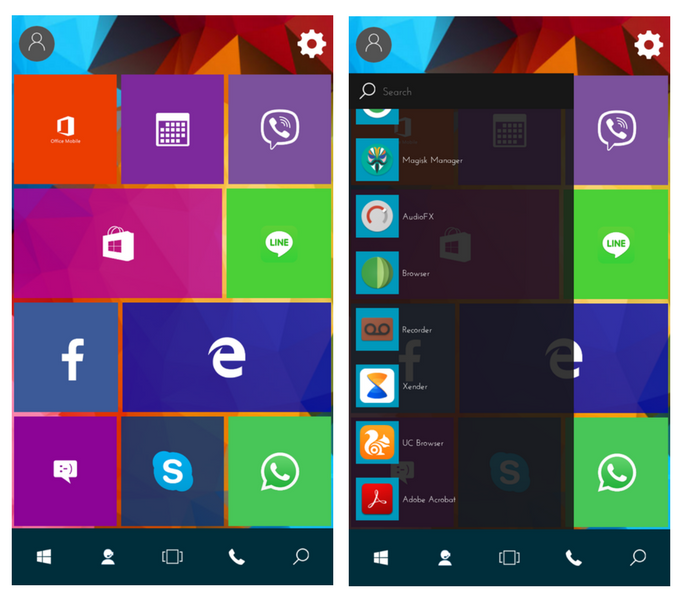 Last but not the least is SquareHome 2.

The launcher lets you add a variety of things on the Windows-like Start screen. You can add apps, widgets, Shortcuts, group and more.

It gives five tile-resizing options and the ability to drag-and-drop tiles to personalise your start screen.

It doesn’t have the usual swipe-left-to-reveal-app-list instead, it has a dedicated tile on the start screen for that.

You can even change the image, label, style and icon of a particular tile. Something which even Windows doesn’t have. 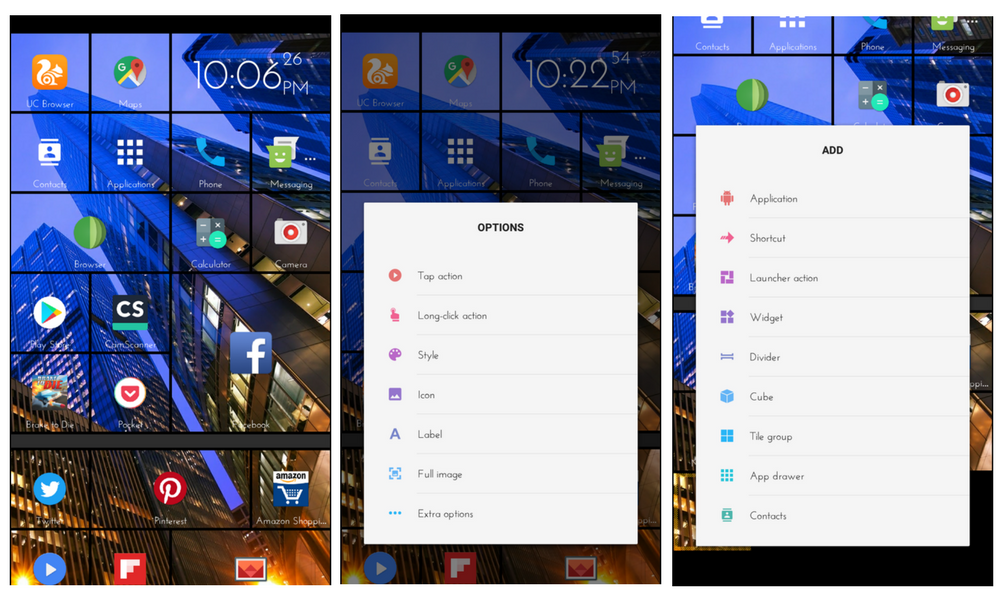 What do you think about these apps which mimic Windows for Android? Do you have an app which I missed out? Do let me know in the Comments!

And don’t forget to share this article with your family and friends on your Social Networks.