According to latest statistics from technology research firm Strategy Analytics, Apple overtook Samsung to become the top smartphone vendor worldwide in the 4th Quarter of 2016. Apple sold 78.3 million units worldwide in Q4 16, which is a 5% annual increase as compared with 74.8 million units sold in Q4 15. The market share of Apple stood at 17.8% whereas Samsung’s market share was 17.7% worldwide.

These numbers are obvious. Samsung had a terrible 2016, thanks to Galaxy Note 7 chaos. The South Korean-giant had to recall 2.5 million units of the device which could have been the ‘Phone of the Year’. If this fiasco didn’t take place, things would have been the other way round. But Apple took all the advantages it could. This was the iPhone’s best performance for over a year. 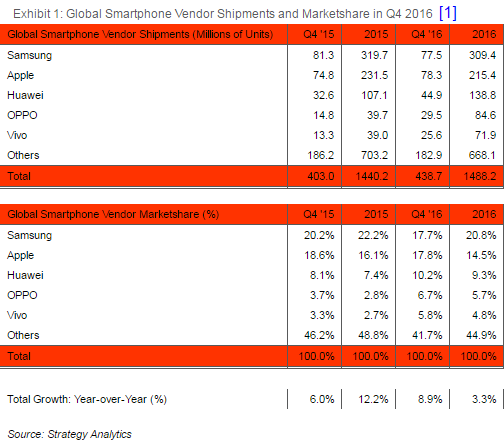 Strategy Analytics also shared that overall 1.5 billion smartphones were shipped in 2016 with a Year-on-Year growth of 3.3%. Chinese manufacturer Huawei ranked at the third position with a market share of record 9.3%. Oppo and Vivo were at the fourth and fifth position.

Samsung is bidding high on its next and much-awaited flagship device, the Galaxy S8. The company might regain its top position very soon as the S8 is rumored to be releasing in the next few weeks after the MWC 2017.

What do you think about Apple becoming the top smartphone vendor? Do you think Samsung will bounce back with the Galaxy S8? Share your thoughts in the Comments.

How to Factory reset Android smartphone of yours