You know what? There is one major problem with all the iPhones. They do not support expandable storage.

It’s not just me but almost every iPhone user, at some point, wished that their iPhone had a bit more space or, even better, an expandable storage.

Hoping for expandable storage is useless. But, we can definitely do something to get more storage space on our iPhones.

The first step towards getting some more storage space on iPhone is deleting useless apps, files, images, audios or videos.

Also Read: How to Recover Deleted Photos from iPhone

When we think about deleting something to free up space on our device, the first thing that comes to our mind is APPS!

It is always a good idea to get rid of those apps which you don’t use anymore. It’s even a better idea to uninstall games which we don’t play anymore.

If we don’t use them, that means they are unnecessarily eating up space on our iPhones.

It’s time that we delete those apps.

It’s time that we uninstall those games.

But how? How to delete apps on iPhone?

How to Delete Apps on iPhone?

There are two – simple and easy – ways to uninstall or delete an app from iPhone.

1. By Holding the App Icon

This method of deleting an app on iPhone is very basic. Here’s what you’ve got to do:

If you are using iPhone 6S or later models, just make sure that your hold is not too firm. It will count as 3D Touch and will open up additional options for that particular app. 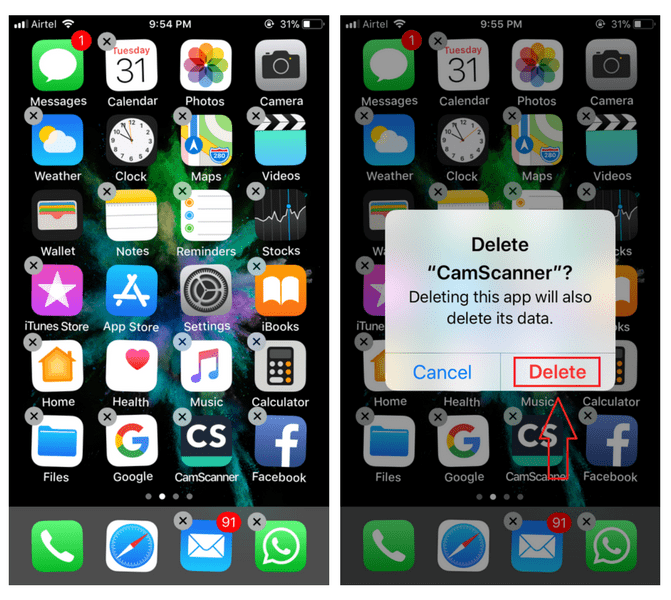 Note that some of the app icons will miss that X button. That’s because those apps are default iOS apps and cannot be deleted.

And that’s it. The app and all of its data will be deleted from your iPhone.

2. Deleting an App from the Settings

Apart from the above method, there is one another way to uninstall apps from iPhone. From the Settings.

Here’s how you can delete apps from iPhone’s Settings:

Currently, these are the only methods to delete apps on your iPhone. There was a way with iTunes but with a recent update, Apple has removed the ‘Apps’ section of the iTunes. So it is no longer possible to delete apps using iTunes.

However, there is one exception. In case you are still using the older version of iTunes, i.e before iTunes 12.7, you still have a chance to delete apps from iTunes.

Do you know of any other method of deleting apps on iPhone which works for you? Let me know in the comments and I’ll add it to the list.